Joplin’s EF-5 Tornado: 2 Lessons Learned about Bringing a Community Together 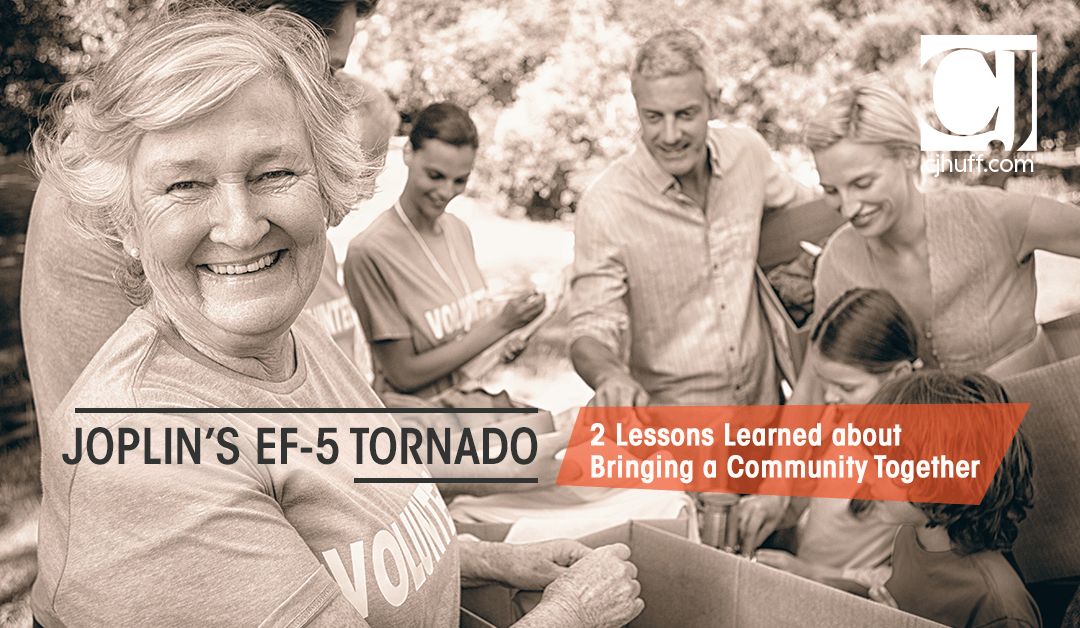 How often have you seen this scenario play out on a national scale? A community is faced with a major obstacle and suddenly becomes either united or divided.

I was in a unique position at the time of the Joplin Tornado to observe and participate in a number of high-level conversations related to the recovery effort. There were certainly a lot of decisions and actions in the early hours and days that set the course for recovery. Each of which had tremendous influence on the coming together of the community that may have separated Joplin’s response from that of other communities who have experienced unexpected tragedy. As I reflect on that difficult time in the history of our community, I learned two valuable lessons about what it takes to bring a community together after tragedy.

Firstly, if a community is to unite under an extreme time of stress, the leadership must be others centered. A powerful lesson I learned was that if a “service above self” mindset isn’t already a part of the fabric of a community, it’s not likely going to suddenly show up during a crisis. People do not change who they are in a crisis. On the contrary who they truly are is magnified. This can be a negative or a positive experience. The worst-case scenario is that a community has too many looking to serve themselves and the net effect of self-centeredness wins out. On the other hand, I witnessed the amazing collective impact of neighbors helping neighbors and servant leadership. Thankfully, in the case with Joplin, I saw more good than bad and in a time of crisis what was magnified was community pride, resilience and a tremendous sense of duty, which created the momentum necessary to sustain the long-term recovery effort.

Secondly, vision casting is critical. While long-term planning is not on many people’s minds in the immediate aftermath of a tragedy, I learned very quickly that people need a vision. The message was clear…not only were we going to build back, but we were going to build back better than we were before the storm. That common theme became a rally cry. Communicating a vision and a hope for the future was instrumental to help a broken community see beyond today and to begin thinking and planning ahead for tomorrow. I learned that visions don’t need to be complicated. In fact, ours was so simple that it could be easily articulated and helped people see a path forward. More complicated plans were to come, but vision casting early in a time of crisis is absolutely imperative to drive a community forward together.

Is your community prepared for a time of crisis? How can you begin those important conversations and begin developing the pre-need relationships critical to a successful recovery effort? Does your community have the capacity to lead under extreme circumstance? At the end of the day, crisis response and recovery is about leadership and ability to respond quickly with strategic intent while keeping the best interest of the community at the center.