How Faith Based Organizations Can Be a Powerful Resource for Schools 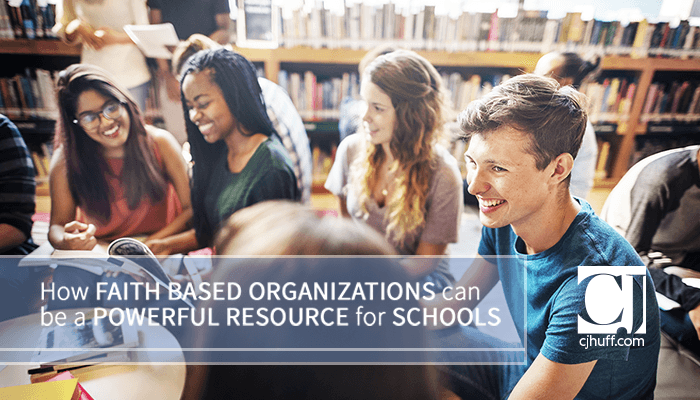 The first amendment to the Constitution of the United States reads, “Congress shall make no law respecting an establishment of religion, or prohibiting the free exercise thereof…” The meaning behind those words has been the subject of religious, political and legal debate for centuries. The engagement of churches in schools is often at the center of that debate.

At some point early in my school administration coursework I recall a very specific lecture by one of my professors who made this stern statement to the class when referencing The Establishment Clause. “Keep churches at arms length or else you are asking for trouble.” I certainly heeded that warning during the first part of my career, but mistakenly so.

The fact is religious organizations can still play a vital role in public schools, but in many communities that wall of separation between the church and school is tall and thick. Why? Both faith-based organizations and schools feel that wall must exist to pass constitutional muster. The irony in this estranged relationship is both have the ability to fulfill the mission of the other. So how can this partnership happen and survive a constitutional litmus test?

Steve Patterson is a local faith-based leader I have gotten to know over the years. To say he is passionate about the potential impact of school/church partnerships would be an understatement. I had the good fortune of hearing him share a vision of what that partnership can look like to his peers at a convening of faith leaders. His message to the skeptics in the room was simple,

“The constitution has been tested and we are not here to test it again. We already know we cannot be the voice of God in our schools, but we CAN be the hands and feet of God by serving as mentors and tutors. By helping teachers in the classroom and serving as door greeters to the children entering our schools.”

Steve was absolutely correct. The fact is in schools across our country, children are being taught and supported by educators who already represent diverse faiths. They give of themselves everyday to support a growing number of children who need direction and support. But as the needs of children continue to increase, the capacity of educators to fill the void has become severely strained. Churches can help fill that void and bring resources and support to the table. They have access to a very valuable resource to schools…people with servant hearts.

If you are one of those communities or faith-based organizations trying to figure out how to partner, I’d encourage you to take Steve’s words to heart. As Thomas Jefferson said, “I never considered a difference of opinion in politics, in religion, in philosophy as a cause for withdrawing from a friend.” The truth of the matter is that people even within the same faith do not always agree on every point. But if we can move beyond the differences and instead lend support, value is added to both churches and schools as each one helps fulfill the mission of the other.

Are you willing to put your faith into action? There is no question our children need you now more than ever. Our communities and schools will be richer for this kind of collaboration.